We are very fortunate to have

Two of them are by the famous artist Evie Hone.

Here is the one called: ‘The Good Shepherd’ 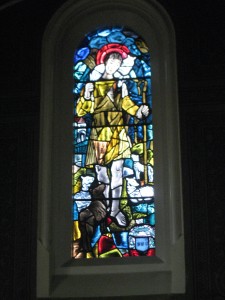 Today, Paul from the parish came to talk to us

about ‘The Good Shepherd’ and ‘The Lost Sheep’.

This was part of our preparation for our First Confession

which is taking place on the first Saturday in March.

We told Paul what we knew about the story.

Cian said that the Good Shepherd is

God our Father in Heaven

and the sheep are

all the people in the whole world.

How God takes care of each one of us

was something that we found

Paul made a sacred space.

In it he placed some tiny sheep

and the singing bowl. 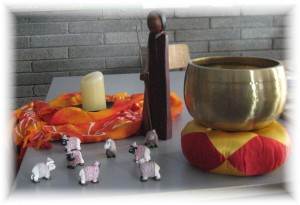 We closed our eyes and listened

to Paul’s voice and the music he played.

Nicole said that she hadn’t felt so relaxed since

Paul came in the last time.

when he was going to sleep.

He said he hadn’t felt as relaxed since

he was in a jacuzzi on holidays.

since going on a walk

one evening in Spain

when she heard the crickets chirping.

Paul has asked for some feedback on the meditation.

Well the only bad thing was that the quietness

was interrupted by intercom bell.

When asked how things could have been improved,

there was silence and then Cian said:

‘By Paul coming in more often,’

with which we all agreed.

4 thoughts on “The Good Shepherd”