The children of 2nd Class, Room 6 were very interested

to hear stories about the history of Greystones.

He was amazed to hear that

people have been living in Rathdown

since the Stone Age.

Twenty years ago, a cliff near Rathdown

fell into the sea.

Among the rocks and earth,

were also fascinated to hear

that Vikings were in the area. 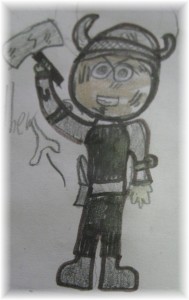 One of our favourite things to do,

when we have visitors from older classes

or students from Transition Year,

on work experience, visiting our classroom

is to challenge them to a game of Viking Quest.

We don’t always win this game …

but we usually do!

This is what we learned in class:

We know Vikings visited our local area because

1. Some of the local placenames

came from the Vikings.

‘Gata’ is the Viking word for road.

between Bray and Greystones.

in the local area.

3. The monks wrote a book called

‘The Annals of the Four Masters’.

In it they said that there had been

The King of Leinster beat

We think it is exciting that Greystones

has had such an interesting history

from the time of the Stone Age

and that Vikings visited here too.

Later we heard that a castle

was built at Rathdown. 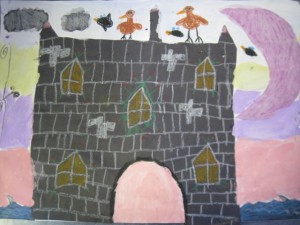