was a famous American artist,

who specialized in painting in Wisconsin in the USA. She lived on a farm,

with nature all around.

but she loved art

and by the age of ten

she knew she wanted to be an artist.

She moved to Virginia

when she started secondary school.

Her drawings were greatly admired

by her friends and her teachers.

But she got seriously ill with typhoid.

When she recovered, over a year later,

she went to study art in New York.

to continue with her studies

She experimented with painting

in many different ways

before she developed her

own special way of painting.

In 1916, a photographer named Alfred Stieglitz

put some of her paintings in his gallery without telling her.

At first Georgia was upset, but she forgave him.

They bought a house on a lake

They lived there during the summers.

It was here that Georgia began painting

the close-ups of flowers in bright, bold colors

that she is now most famous for. This was new. We see lots of pictures like this now.

But at the time, only photographers had taken pictures like this.

In her later life Georgia moved to New Mexico.

She painted the desert,

and the adobe houses.

She especially loved to paint pictures

of desert landscape and animal skulls. She continued to paint until she lost her eyesight.

She was ninety-eight years old when she died in 1986. We first learned about Georgia O’Keeffe’s

when we saw her famous painting, ‘The Lawrence Tree’.

We painted our own trees inspired by her’s HERE.

We are following the programme in comprehension:

We are learning comprehension strategies.

As a whole-school, we concentrated on ‘prediction’ in September and October.

Now we are practising ‘visualization’.

We are reading ‘The Hodgeheg’ by Dick King Smith.

We are also learning a lot about hedgehogs and road safety in class too.

Nicole drew this one:

We drew lots of pictures to illustrate The Hedgehog Family:

This is Owen’s one to show you the family…

‘… sitting in a flower-bed at their home,

the garden of Number 5A

of a row of semi-detached houses

in a suburban street.‘
This is Julia’s 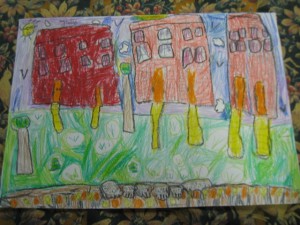 Some other children also drew what they could visualize when we read:

‘On the other side of the road was a Park,

very popular with the local hedgehogs

As well as worms and slugs and snails,

which they could find in their own gardens,

there were special attractions in the Park.

Mice lived under the Bandstand,

feasting on the crumbs

frogs dwelt in the Lily-Pond,

and in the Ornamental Gardens

grass-snakes slithered through the shrubbery’. 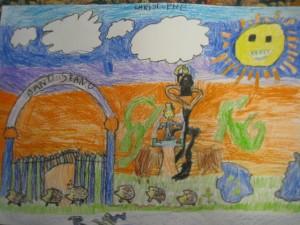 JC included all these special features.

Here are our visualizations:

Visualizing ‘The Hodgeheg’ by Dick King Smith on PhotoPeach

Here is an Animoto of our work:

We would love to hear what you think of our work.

Please don’t leave your child to explore online unattended
The internet is a portal to the world outside. Children should be supervised.

In Art this week we painted trees.
This is Laura’s work: 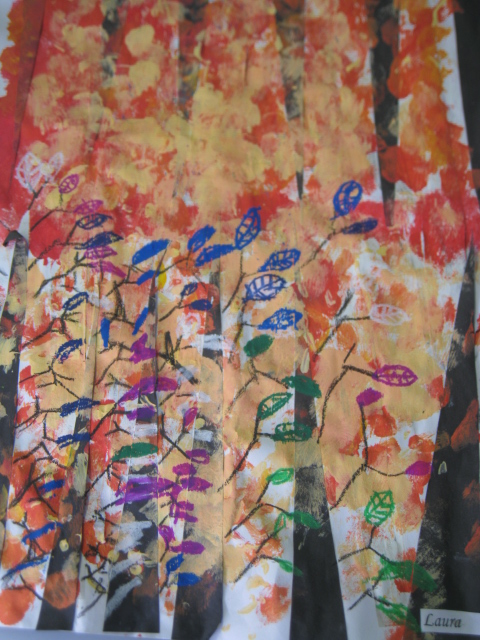 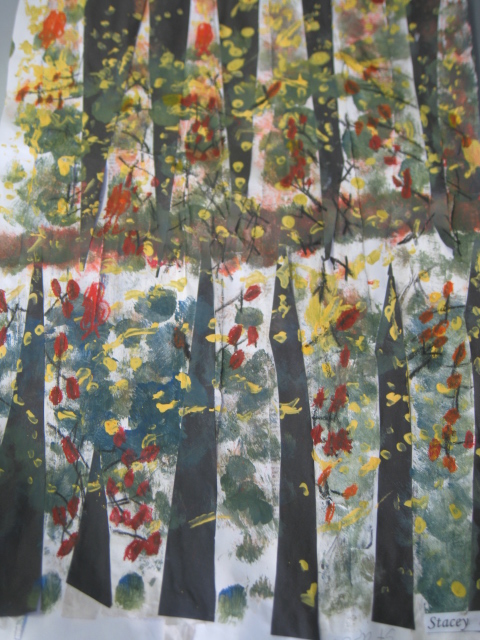 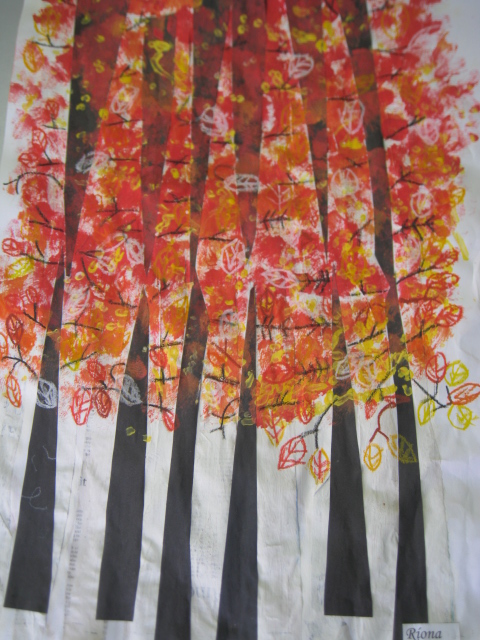 You can see more at the following link:

Trees make our world a more beautiful place. They provide homes for many creatures. We appreciate trees.