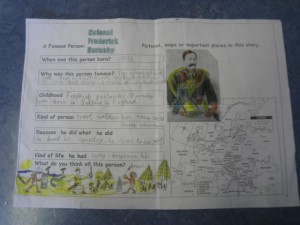 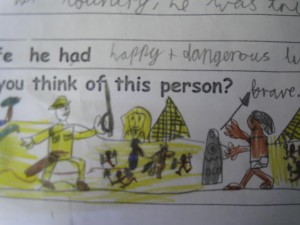 Projects about people in history.

Now we are doing projects about people.

Our first project was about Isambard Kingdom Brunel who was born in 1806.

Next we are going to learn about Elizabeth Whitshed

and her husband Colonel Frederick Burnaby.

Colonel Frederick Burnaby was a Victorian celebrity: a soldier, adventurer, and writer.

He and his new wife Elizabeth Whitshed travelled to North Africa on honeymoon,

but due to delicate health, Elizabeth returned to Greystones.

She moved to Switzerland for health reasons.

Colonel Burnaby was killed in action (near Khartoum in Sudan) in 1885.

Elizabeth went on to become a mountain climber and alpine expert. S

he married twice more and lived to the ripe old age of 73.

Other projects are planned on
Inventors: Thomas Edison and Albert Einstein.

Did you know that both of them found school difficult?