We get great mileage out of Halloween in school.

Because the children find it so interesting

it is a great motivator for learning.

and two in Irish on the theme of Halloween. Children may also enjoy this story:
‘The Witch’s Stew’ by Everett Morse 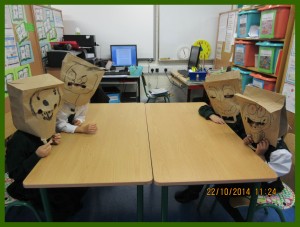 They might look a little scary, but luckily they were very friendly.

Animoto has a great Halloween template for making slideshows.

They have a selection of Halloween songs too.

We learned a lot of songs and poems about Halloween.

Click here to see them. They are A LOT OF FUN 😀

Link to the words of this poem There are ten ghosts in the pantry,

There are nine upon the stairs,

There are eight ghosts in the attic,

There are seven on the chairs,

There are six within the kitchen,

There are five along the hall,

There are four upon the ceiling,

There are three upon the wall,

There are two ghosts on the carpet,

Doing things that ghosts will do,

There is one ghost right behind me

In a Dark Dark Wood… Photo Credit: Luc B via Compfight

In a dark, dark wood,

there was a dark, dark house;

And in the dark, dark house,

there was a dark, dark room;

And in the dark, dark room,

there was a dark, dark cupboard;

And in the dark, dark cupboard,

there was a dark, dark shelf;

And on the dark, dark shelf

there was a dark, dark box;

And in the dark, dark box Photo Credit: Great Beyond via Compfight

And in the dark, dark box there was a….witch! with a nasty laugh

but a heart of gold.

who wouldn’t hurt a flea,

Just to stir the pot

Of the witches’ tea. Well, you need a pointed hat

With silver stars and golden moon

And perched on top ……a bat.

and rotten eggs and fried frogs

to make some horrid smells.

A wand, a cloak, and one dead rat,

And great slime from the drains.

Do you still want to be a wizard?

We got this message from our good friends

This is our reply:

Most certainly we celebrate Halloween:D

In many ways the more recent additions to our traditions are influenced by the USA,

for example, as you say in your message, dressing up in costumes and going ‘trick or treating’. However a celebration at this time of year

goes way back into the ‘mists of time’. Photo Credit: I Believe I Can Fry via Compfight that travelled with the emigrants to the USA.

and were re-exported back to Ireland

Thanking you for your continuing comments and interest in our blog

all the way from New Zealand 🙂

We wonder does New Zealand have a Halloween Tradition?

With every good wish …

‘If Only The Best Birds Sang’.

UPDATE1: If you click on the ‘KEEP READING’ button below, you can see Mr. Webb’s reply 🙂

UPDATE2: Thank you to Mr Webb who put a link about our blog 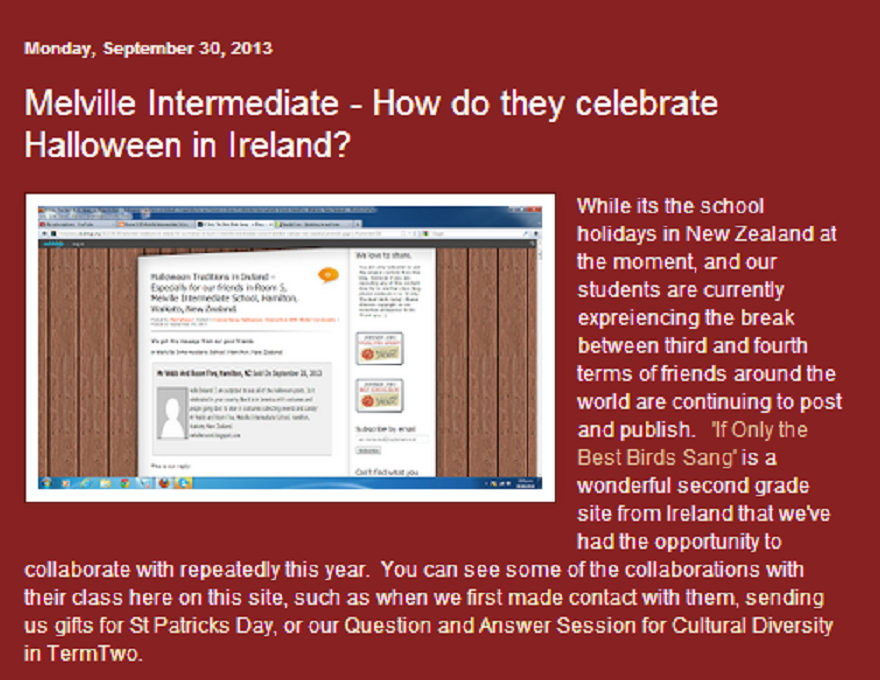 When it is late

When it is late

and it is dark

Then he clatters and clangs,

So we pull up the cover

and we block up our ears

I saw a ghost.

I saw a ghost

But that was just

I knew that ghost.

It was MY FRIEND. The skeletons are out tonight,

They march about the street,

With bony heads and bony knees,

And bony hands and feet.

Up and down and all around

where do you fly?

and over the sky.

what do you eat?

what do you drink?

where do you sleep?

Up in the clouds

where the pillows are cheap.

I ever did see,

Just peeked through the window

and looked at me.

I waved once or twice

and flew to the moon. Halloween Guess Who? on PhotoPeach

Please remember to supervise your child when they are online.

We are looking forward to Halloween:

Are you brave enough to look at our pictures? on PhotoPeach

Please supervise your child when they are online.