This time of year, we are revising the grammar

we have learned during the year.

We found this great game.

It is called Grammar Ninja.

It is great fun

and we certainly get to revise our grammar.

Try it and see. Scroll down this link for other online games we use to practise our grammar. 2. Build A Clubhouse with Harcourt School.com

and if you can’t find anything there,

there are lots of options here: has a very interesting site about words and language

2. There is an excellent section on Nouns

from the U.S. on the topic of nouns:

4. What are Proper Nouns?

We are learning about nouns and naming words.

A noun is the name of anything.

Sometimes it is helpful to say

‘If I can take a photograph of something, it is a noun’.

But this is not always true.

Some nouns would be hard to take pictures of.

Many of these special nouns end in -ness.

For example: happiness and sadness.

Love is a noun but it would be hard to take a picture of it. 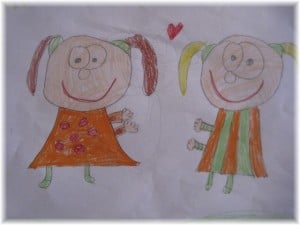 Clara drew of picture of what love means to her. 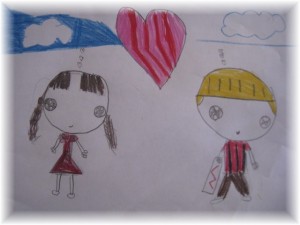 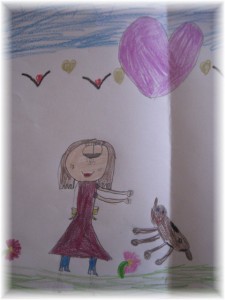 Learn a little more about nouns that you could not take a photograph of!

We gave examples of nouns we knew on this Audioboo:

listen to ‘Time for Grammar – Nouns or Naming Words’ on Audioboo

These are nouns you could not take a photograph of:

listen to ‘Nouns you cannot take a photo of!’ on Audioboo 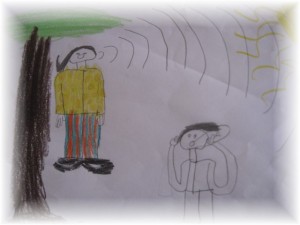 Senan drew a picture to illustrate the abstract noun ‘sound’.

It would be challenging to take a photograph of a ‘noise’ or a ‘sound’.

We have been posting a lot of maths games here recently

so we thought we would post some English language and vocabulary ones.

1. A NEW ONE; THE FROG GAME IS GOOD FOR PRACTISING ‘OPPOSITES’