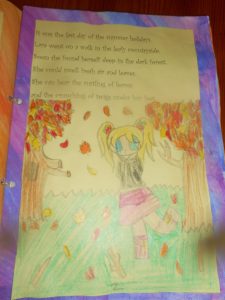 Once upon a windy time there lived a shy girl called Lara Barkson.

It was her 9th birthday.

Lara had beautiful long hair like gold and pale blue eyes like the sky on a windy day.

Let me tell you about her.

She disliked bullies and when the world is humdrum.

She is good at art, geography and making up stories.

Her special abilities was that she speaks 39 languages.

She lived in Red Deer Town which is full of buildings,

surrounded by tall trees and squirrels.

It was the last day of the summer holidays.

Lara went on a walk in the leafy countryside.

Soon she found herself deep in the dark forest.

She could smell fresh air and leaves.

She can hear the rustling of leaves and the crunching of twigs under her feet.

She likes exploring the outside world and having fun but today Lara had eyes of salty tears.

‘Why am I lost?’ She sadly thought.

She reached in her pocket to reveal a photo of a boy.

‘Brother’ she whispered, ‘Where are you?’ 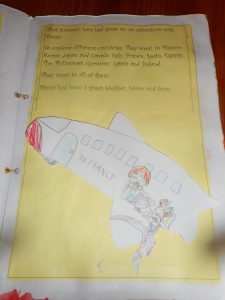 That summer, Lara had gone on an adventure with Fionn her long lost brother to explore different countries.

They went to Mexico, Korea, Japan and Canada,

The Philippines, Germany, Latvia and Poland.

They had many adventures and went to all of them.

Fionn had been a great brother, brave and true.

If she had known what would happen next maybe she could have done something.

Lara and her brother Fionn had been on a ship returning home. There was a storm.

The ship they were on hit some rocks and the ship began to sink.

Lara climbed into a life boat with Fionn.

A big wave overturned the boat and Lara remembered nothing else.

Except that her long lost brother was once again lost.

Sleepily Lara woke up in hospital.

She found herself in a hospital bed.

She saw her parents’ faces happy and relieved.

‘Mom, Dad’ she murmured. She gave them a big hug.

Too bad you didn’t get to meet Fionn, she told them.

She felt a warm hand on her should.

Lara turned to see her brother in the next bed with a sling and a cast.

Lara could see a tint of gold in her tears.

She reached out to hug Fionn and he called out

‘Watch out I’ve my arm in a sling.

She let go obediently and smiled.

As the family reunited, they lived happily ever after.

And after all her adventures,

Lara was confident now and was no longer a shy girl any more.