Once upon a bright and early time there lived a brave and cheerful little girl.

Her name was Alex.

Up in the graveyard near Alex’s house

there was a Zombie Leader was called Jad.

There was a Zombie team.

Jad’s home was a coffin in the grave yard. 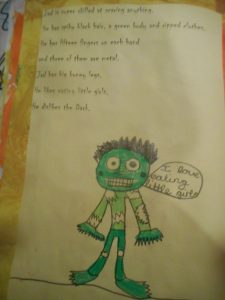 Jad is super skilled at scaring anything.

He has spiky black hair, a green body and ripped clothes.

He has fifteen fingers on each hand

and three of them are metal.

He dislikes the Dark. 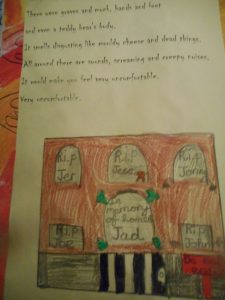 The graveyard was a triple terrible place to live.

There were graves and muck, hands and feet

and even a teddy bear’s body.

It smells disgusting like mouldy cheese and dead things.

All around there are sounds, screaming and creepy noises.

It would make you feel very uncomfortable. 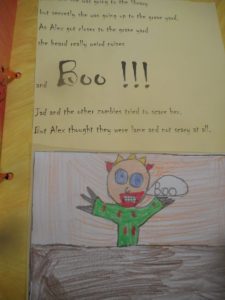 Alex said she was going to the library

but secretly she was going up to the grave yard.

As Alex got closer to the grave yard

Jad and the other zombies tried to scare her.

But Alex thought they were lame and not scary at all. 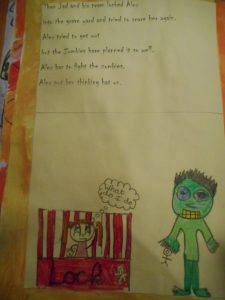 Then Jad and his team locked Alex

into the grave yard and tried to scare her again.

Alex tried to get out

but the Zombies have planned it so well.

Alex has to fight the zombies.

Alex put her thinking hat on.

‘Boss what happens if it gets dark?’

asked one of the Zombies nervously.

Alex heard that Zombies were afraid of the dark,

so with a big smile,

she told them it was getting dark.

‘It will go pitch black any minute now,’ she laughed,

so they ran away

NEVER
TO
BE
SEEN
AGAIN 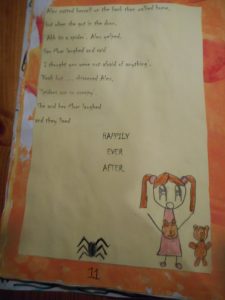 Alex patted herself on the back then walked home,

but when she got in the door,

‘Ahh its a spider’. Alex yelped.

Her Mom laughed and said

‘I thought you were not afraid of anything’.

‘Spiders are so creepy’.

She and her Mom laughed