She was a very small little girl

and even though she was friendly and gentle,

for some reason she was afraid of unicorns. 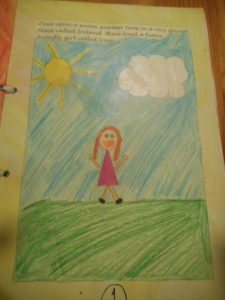 She knew they were imaginary

but she thought their horn looked sharp and dangerous. 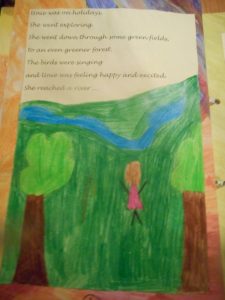 She lived in Ireland.

One day she went down through the green forest.

The birds were singing and Unie was feeling happy and excited. 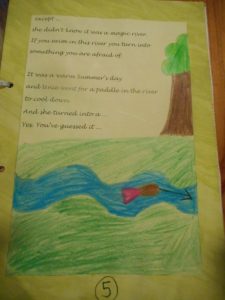 She reached a magic river but she didn’t know it was magic.

If you swim in it you turn into what you are afraid of.

She swam in it and turned into a UNICORN. 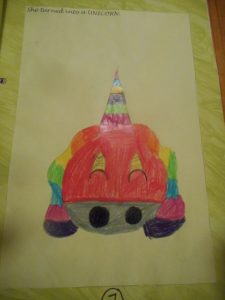 There is a wizard

and the other unicorns told Unie immediately

that the wizard is wicked.

Unie explained to the other unicorns

that if they tell her how to get home she will help them to defeat the wizard.

They go on the straight path to the wizards castle.

They sneak in and find that the small sneaky wizard is sleeping heavily.

They quickly and quietly lift the wizard and lay him on the cold dirty dungeon floor.

They quickly get out.

They brought Unie to Sweet Land.

They saw a small skinny path up to a small red house.

The unicorns knocked on the little lime green door.

A gnome opened the door. 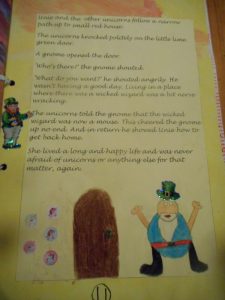 ‘What do you want?’ he shouted angrily he wasn’t having a good day.

The unicorns told the wizard to help them.

Soon Unie was back home.

She lived a long and happy life

and lived happily ever after.