Once upon a magical time, there lived three girls.

Their names were Brianna, Caoimhe and Emily.

Emily Caoimhe and Brianna were three best buddies who lived in a noisy, grey town.

They were all in the same class in school and stuck together like glue. 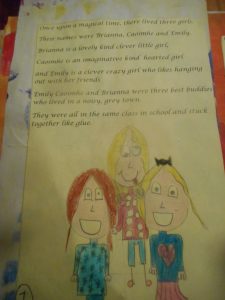 One day the three girls were strolling round town

when they saw something glowing.

They got closer and closer

and saw a ordinary litter bin was sparkling.

They looked inside the bin

and saw a portal

leading into a magnificent, magical land. 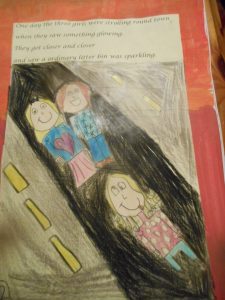 When they ran through the portal together

and they saw some brightly coloured flowers.

They got a fright when the flowers

Then the flowers started to sing a strange song.

‘Beware, beware of the Wicked Witch’.

Some little elves appeared and called out loud 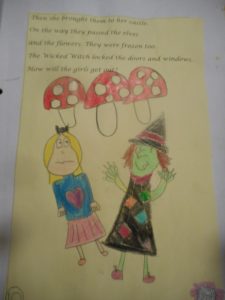 As the girls ran through a magical lollipop forest

they sniffed the perfumed air.

Ahead they could see a dark castle

and an enormous black cauldron. 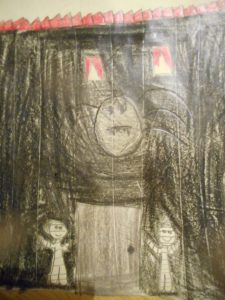 Behind them they could hear the elves

calling out even louder.

‘The witch is coming.

The wicked witch is coming.

The girls felt scared and curious.

What would happen next?

Emily, Caoimhe and Brianna wondered why.

The girls were scared so they hid

behind some brightly coloured lollipop trees

and didn’t say a word even when they saw a cat.

It was the Wicked Witch’s cat.

Where ever the Wicked Witch went,

The girls saw the Witch

They tried to run away

but sadly the witch made them freeze.

Then she brought them to her castle.

On the way they passed the elves

and the flowers. They were frozen too.

The Wicked Witch locked the doors and windows.

How will the girls get out?

The evil witch locked them in the castle.

They knew they could only escape

if they could find the key.

In through the window flew a flying puppy.

‘I have seen everything now’ said Emily. Caoimhe

and Brianna couldn’t believe their eyes either.

‘Hi there’, woofed the puppy.

‘I have heard everything now’ said Emily.

‘I heard the witch was up to her old tricks again’,

barked the puppy. ‘I will try and find the key’.

So the girls looked inside

while the puppy was checking outside.

But they could not find the key anywhere. 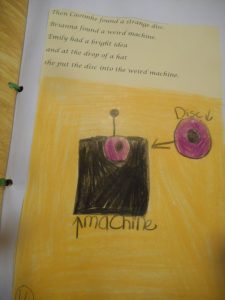 Then Caoimhe found a strange disc.

Emily had a bright idea

and at the drop of a hat

she put the disc into the weird machine.

There was a whirring sound

and the door of the castle flung open

and the three girls escaped from the castle

and the flowers and the elves

were released from their magic spell too.

But then the girls faced a problem.

They were out of the Witch’s castle

but how would they get home.

The elves said thank you for releasing

the magic spell that had us frozen.

They presented Emily, Caoimhe and Brianna

with  a powerful wand

that made the witch disappear.

Her cat vanished too.

sent the girls back through the portal.

As the girls landed in the bin.

They got out and saw a note.

They opened it and it said.

We are so sorry to say goodbye.

We wanted to say we will miss you.

and thank you for getting rid

of the Wicked Witch from

Bye bye we hope we see you again.

Your friends The Elves 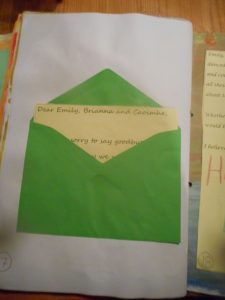 and could not wait to tell

about their magical adventure

Whether they would be believed or not

would be another matter.

I believe them and I hope you do too.