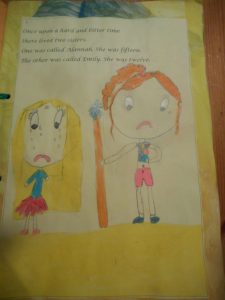 Once upon a hard and bitter time

One was called Alannah. She was fifteen.

The other was called Emily. She was twelve.

Once upon a happier time they had lived at a hotel.

Their Mum and Dad decided that they wanted

to go travelling so they sent them to boarding school.

While travelling these parents disappeared so the girls

were sent to the Victoria Heart (All Girls) Orphanage.

She has eyes that are green like the sea.

She is very tall for her age.

She likes adventures and dislikes homework.

but she is very shy.

She likes relaxing and dislikes adventures.

is an unpleasant place to live.

It smells of rotten eggs and gone off fish.

There are ragged, purple, faded curtains in the windows.

When the girls look out of the window

they can see tall hills

and the big city in front of them.

No matter where the girls are in the building,

they can hear the shouting of the principal

Mr Crushton at the people who got detention.

Mr. Crushton was in a bad mood.

A worse mood than yesterday.

And worse again than the day before.

He was looking for Emily.

Both girls squeezed in behind the dark, musty curtain

and they found a door leading to a tunnel.

It took them from the orphanage to the 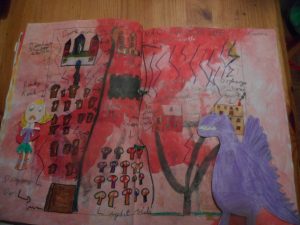 They went exploring in the museum

and found their way into a magical world.

Unfortunately it was a world ruled over by

She lives in Shadow Castle on The Dark Side

just north of the Dragon’s Den.

The problem is Dorcha.

The girls defeat Dorcha with the magical orb.

They have to complete three challenges

and with the help of a friendly dragon

they destroy Dorcha and the Dark Side. 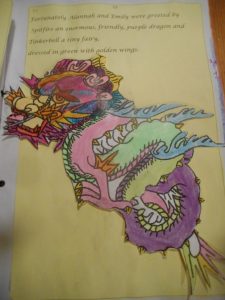 Many/All of the girls in the Orphanage get sent

(or there are so many left,

the Orphanage keeps on going

but this time with a kind principal.

What would be a good name for the new principal?)

The girls can visit the dragon whenever they want.