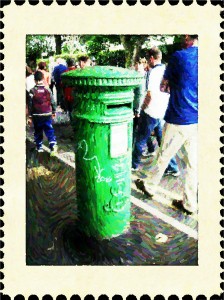 We have sent some St.Patrick’s Day greetings

to our friends in Room One, Aurora School, New Zealand.

In fact the envelope was so large it didn’t fit in the post box above!

Now we can track the progress of our package.

We posted this on March 6th.

We can see that it has left Heathrow Airport in London, UK

shortly after midnight on March 7th

and is on its way to New Zealand.

the package had already arrived in New Zealand at 2.16 p.m.

on the afternoon of Monday, March 10. 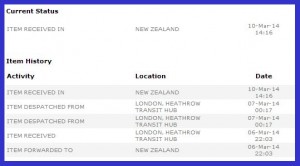 This shows that New Zealand is ahead of Ireland.

that it will arrive on time for St.Patrick’s Day on 17th March.

We see from the messages we received from Aurora School

that the envelope arrived on the 12th of March in New Zealand!

12 thoughts on “Tracking the Post! Following a letter on its journey from Ireland to New Zealand.”