It is about a boy who was

Now he is as flat as a pancake.

His parents used send him

in a large brown envelope on his holidays.

This was cheaper than going by airplane.

We sent our own Flat Stanleys

for a holiday to kind friends and relations.

The children in 2nd Class Room 6 made Flat Stanleys.

We sent them to visit our friends and relatives

in lots of different places.

We found that whether Stanley

travelled all the way to China

or took a short spin to Dublin,

he had GREAT fun and many adventures.

They went to Boston, London and Paris,

the USA, England and Wales.

One snuck home in teacher’s bag. 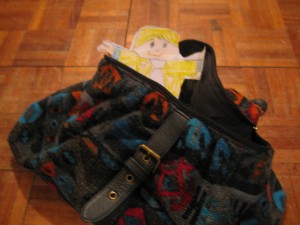 He danced on the piano in her house. 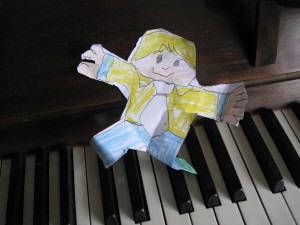 fell in ponds and went on an Easter Egg hunt.

They went to other schools,

One went to the Burlington Hotel in Dublin

and had chocolate pudding for tea.

One got fit and went cross country running.

Another ended up in Wicklow Gaol.

and had his picture in the newspaper!

One of the Flat Stanleys in London

went to Covent Garden and saw an invisible man!

Another Flat Stanley got a make-over.

He ended up with a moustache and a Dublin football jersey.

When Stanley came back from Paris

he had a chocolate for all the class.

He got new clothes in China.

Thank you for taking the time.

It was very interesting project.

It was great fun and gave us a lot to talk about. 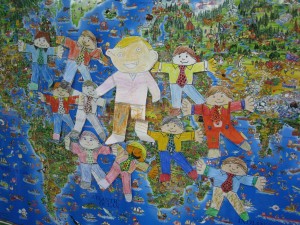