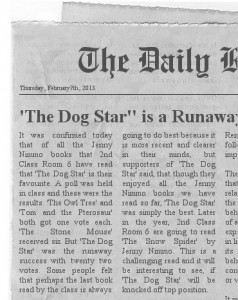 From ‘The Daily Reader’ newspaper:

“It was confirmed today that of all the Jenny Nimmo books that 2nd Class Room 6 have read that ‘The Dog Star’ is their very favourite. A poll was held in class and these were the results. ‘The Owl Tree’ and ‘Tom and the Pterosaur’ both got one vote each. ‘The Stone Mouse’ received six. But ‘The Dog Star’ was the runaway success with twenty two votes. 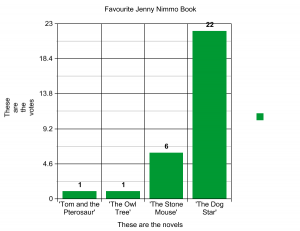 Some people felt that perhaps the last book read by the class is always going to do best because it is more recent and clearer in their minds, but supporters of ‘The Dog Star’ said, that though they enjoyed all the Jenny Nimmo books we have read so far, ‘The Dog Star’ was simply the best.

Later in the year, 2nd Class Room 6 are going to read ‘The Snow Spider’ by Jenny Nimmo. This is a challenging read and it will be interesting to see, if ‘The Dog Star’ will be knocked off top position”.

So why was ‘The Dog Star’ so popular?

We agreed that it was about something

a lot of children dream about:

a dog of their own.

But the story is not that straight forward.

There are a lot of difficulties

in the story for Marty

who is the main character.

Her older sister Clare puts her in a very difficult

situation and she doesn’t know whether to

make her sister happy by being mean to

by being friendly to her.

We found the story

For example we preferred the serious

to the ‘Owl Who Was Afraid of the Dark’

by Jill Tomlinson, even though it made us laugh.

We ‘made the connection’ between the eight and a half years,

that it takes the light from the Dog Star to reach earth,

and that Marty’s Mum went home to God

eight and a half years ago.

Having already read ‘The Owl Who Was Afraid of the Dark’

we knew about Orion and his belt,

and what the Dog Star was, didn’t need to be explained to us.

Even at the end of the book,

we were left wondering about

What was it really?

Where did it come from?

We would give this book ten out of ten

and would recommend it to children

between the ages seven and nine.

or the ‘Continue Reading’ box at the bottom

We would LOVE to hear from you.