Room 6 play memory games in class. Some of them are online:

We play a memory game in class called ‘As I went into Tesco’s. It is good for developing concentration and memory. It is explained on the following link:

I went shopping and I bought a…

The following is a game I enjoy playing in class because for me as a teacher it is a useful reminder of the amount of information a child may retain from a lesson depending on
level of concentration
the children’s ability to retain information
and certainly how engaged or active the child has been in the lesson.

It is a reminder to me as a teacher not to forget the wise saying:

This game also illustrates how stories can evolve as they are passed
from person to person;
how myths and legends were added to from generation to generation.
It can also show children how rumours start or misinformation be passed.

I choose four children.
Three wait where they can’t hear what is being said.

In general the story becomes much shorter.
A lot of the detail is lost and there are many inaccuracies.
But with practice the children improve. It is a game the children enjoy

Even with your own child, tell them a short story
and see if they can relate the story back accurately.
I often use the ‘blurb’ on the back of a book for this activity
or a simple recipe. 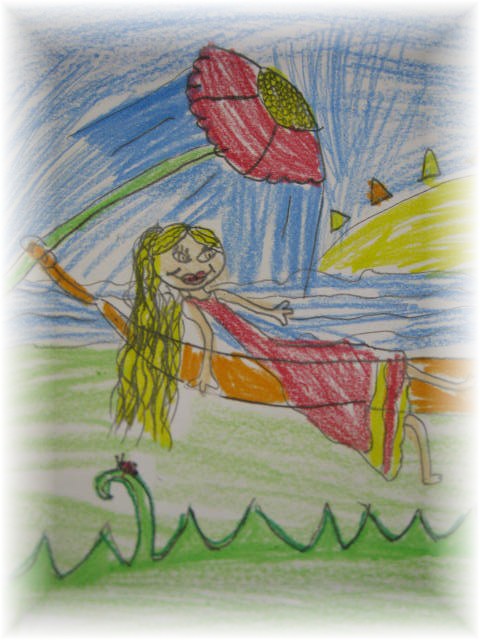 A picture by Alexandra, to put us in a summery mood 🙂