CHAPTER ONE
All about Emma

Once upon a fruity time there lived a girl, three kittens and a witch.
The girl’s name was Emma. She lived on Strawberry Street in Pineapple Town.
Her eyes were blue like blueberries.
Her mouth was red like strawberries
and her hair was like blonde straw and it smelt like peaches.

CHAPTER TWO
All about the kittens

CHAPTER THREE
Trouble with the Witch
But one day something
happened. Along came a witch.
Her hair was long and black. If you look carefully you might see spiders and webs in her hair. Her hat is black with a snake twisted around it. Her dress is purple and black. In the rips of her dress insects are living. Her skin was dark green Her nails were two meters long. Her shoes are crooked. Her broomstick is dusty. Her cat has a crooked back also. Her cat is so black that she blends in with the dark.

CHAPTER FOUR
The Witch needed a new Witch’s cat. Her old cat ran away because the Witch had been unkind. She saw Emma’s little black cat and she decided that would be just the one for her!

What happens next?!
Alexandra is working hard on the next part of her book.
She is planning that it will be a ‘lift the flap’ book.
I hope it has a happy ending! 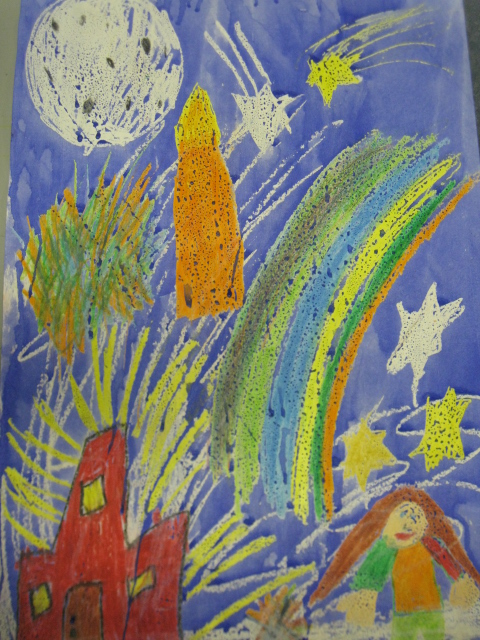 KATE’S ‘LIGHTS IN THE NIGHT SKY’