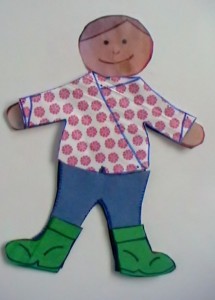 It is about a boy who was

Now he is as flat as a pancake.

His parents used send him

in a large brown envelope on his holidays.

This was cheaper than going by airplane.

We sent our own Flat Stanleys

for a holiday to kind friends and relatives

in lots of different places.

We found that whether Stanley

traveled all the way to Ukraine

or took a short spin to the home of a friend,

Stanley had GREAT fun and many adventures.

Italy and the Ukraine

Stanley went to Brady’s of Shankill

to watch rugby on the television

and he played golf.

He went to Sasha’s and Charlie’s wedding.

He met a witch in the caves in Wookey Hole.

He went sailing in a paper boat in Milton Keynes.

He abseiled off the Tower of London,

spun round the London Eye

and had breakfast with Gordon Brown.

He had a marvelous holiday with Lily in Milan.

We learned a lot about fashion, bridges

and how cement is made in the Ukraine.

Thank you for taking the time to send Stanley

and an account of his adventures back to us.

It was fun and very interesting.