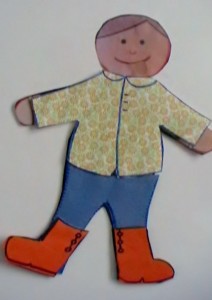 The children in First Class Room 6 made Flat Stanleys.

We sent them to visit our friends and relatives in lots of different places.

We found that whether Stanley traveled

all the way to China or took a short spin to Dublin,

He had GREAT fun and many adventures.

Kalin’s Flat Stanley went to visit her Granny in Wexford.

He fed the birds, fell in the pond and got to go to the circus.

Emily’s Stanley went to see her Granny in Dublin.

He went to the Burlington Hotel

and the lucky duck had chocolate pudding for tea.

all went to visit their cousins in Dublin.

Jenna’s went to a nightclub.

Josh’s went on an treasure hunt.

Jack’s Flat Stanley got  make over.

He ended up with a mustache

and a Dublin football jersey.

Rebecca’s went to visit her cousin in Holland.

He even went to school.

Julia ’s sent hers to visit her Auntie in Paris.

When Stanley came back

he had a chocolate for all Julia’s class mates.

and ended up in Wicklow Gaol.

his aunt and uncle in Athlone.

He did a lot of climbing and saw Athlone Castle.

with her Godfather Fergal.

and saw an invisible man!

He traveled with Georgie’s Dad

by bus and plane and tube

and helped him in the office.

He met the Doyle family in Bray,

and lizards in Wales.

His picture was in the Bray People

and he also flew to Boston USA.

with his cousin Simon in the UK.

Hansen went all the way to China

and a paper car for Stanley.

He danced on the piano in her house.

and met crocodiles and rhinos and hippos.

He also met a giraffe.

It was very interesting and we had great fun.